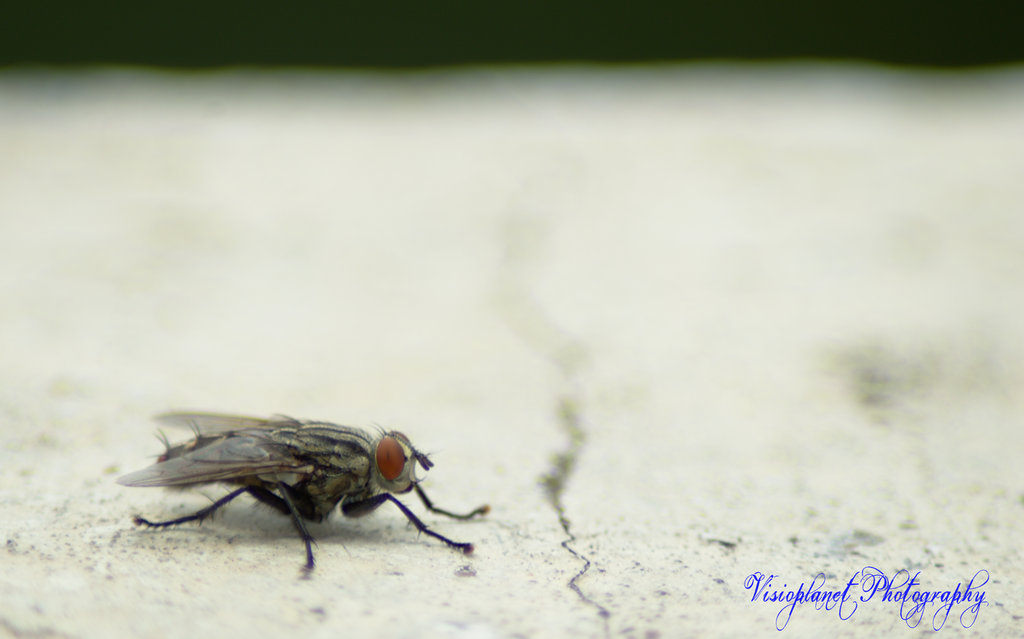 As the name suggests, these flies feed on flesh. As such, these guys are the ickiest of the ickiest. The scientific family name – Sarcophagidae literally translates from Greek to flesh eater. Sarx = flesh, phagein = to eat. They’re known to feed on wounds, decaying flesh, dung, plant nectars, sweet plant stuff such as, fruits and nuts.

They’re also some of the biggest flies around here, at least from what I’ve seen over the years. I’ve only recently been able to discover the name though (thanks largely to Wikipedia).

These guys can cause leprosy, and in animals, usually sheep, they can cause blood poisoning. Even the larvae can cause parasitic infections.

Apparently it’s very hard to identify the specific species for Flesh flies. Only the males can be identified, and that is, after dissecting the genitalia.

I shot this one with my 300mm. It came out pretty well, considering how agile they are (these are relatively much less agile than the common house flies here). But, I wanted to get a better view. By the time I’d found my lens reversal adapter, it flew away. So I had to make do with a (slight) crop.

I identified it by its size, but mostly by its huge eyes and the pattern on its body.

In other news, I’m babysitting Jackie for a couple weeks, and I showed him this picture. He seemed perplexed.

I was also thinking about how in the past, we had photoblog competitions, specifically like coolphotoblogs. But it’s long since been dead, and photofriday now only takes uploads instead of post links, which doesn’t exactly help with photoblogs, even though it might for photographers in general. Since most of you (my dear readers) are photobloggers, do you know any such new websites, would you be willing to participate if a new one came along?