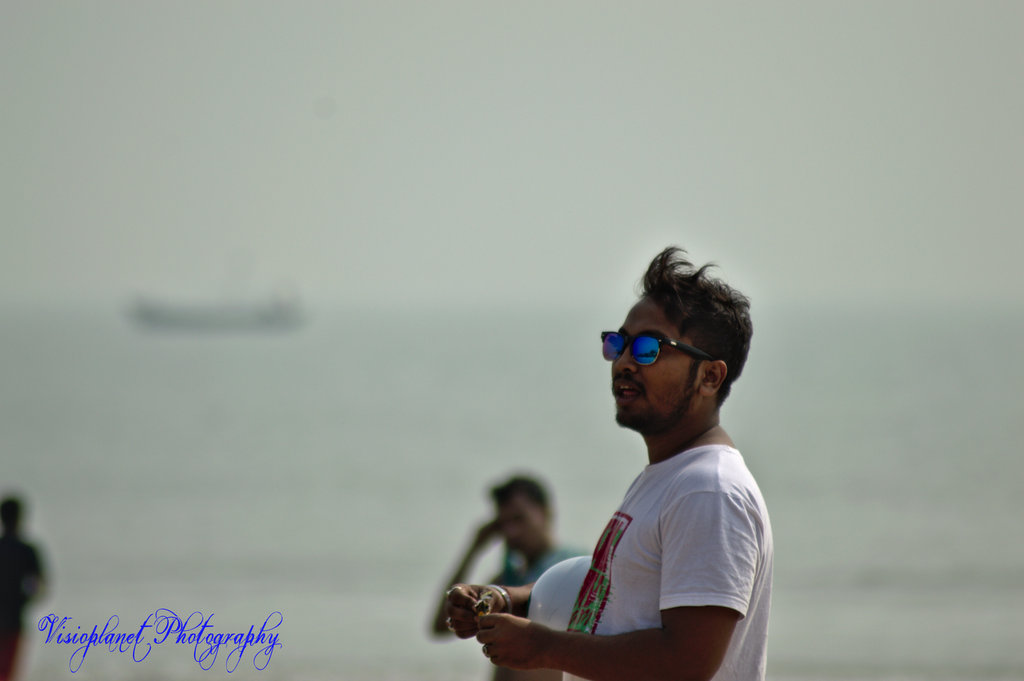 I took this photo of yet another stranger playing football (soccer for my American friends) on one of my many trips to the Tajpur beach. The ball is not a football though. It’s one of those light plastic beach balls.

Football’s big in Bengal (the state this beach is in). They had league football long before it became a thing in the rest of the country during the last decade. I remember when I was a kid living in Kolkata, that the roads will be filled with people whenever there was a match in the Salt lake Stadium.

The last time I was there, was a few months after the huge cyclone Fani. The water was muddied and the beach was leveled. The tides were coming in way further than they used to. As a result, the shack owners had to make and remake their bamboo foundations twice every day. We’d not rented a car this time and went by train, since it was just the two of us this time. My guitarist, however, took his football with us this time. The beach was a lot bigger this time, owing to the leveled elevation on the beach. We went in to dribble and 6 other dudes from two different groups joined in. We played a couple of matches, with teams of 4 each. Some of realized we’re too old for this stuff. There were college kids in one of the groups. They played a lot longer than we could though. Zestful as they were, they kept kicking too hard, we ran towards the sea to catch the ball. The winds blowing towards land helped though, and we didn’t lose the ball.

I recently applied for Facebook application permissions. I was using ifttt for publishing my post links to Facebook and Twitter. Earlier, when I was hosting on blogger, they (ifttt) had developer accounts available, so I’d written an app to change my tags to hashtags, but they have since removed free developer accounts. Not wanting to pay for just being able to generate hashtags, I installed a plugin here from the wordpress plugin repository. But even that requires a permium account for hashtags. Good thing I can code (even though it was PHP, and the last time wrote with PHP was 10 years ago), and that it was licensed under an open source license. So I modified the code to generate my hashtags.

Coming back to the Facebook application. If you’re subscribed to my blog, you might have seen a few posts with the title ‘Test’ yesterday. That was their verification team checking out why I need permissions to post to my Visioplanet Photography Facebook page.